Gluten Free Pasta Dough
So yesterday I decided I wanted fresh pasta. I had never made my own pasta, even before going GF. I wasn’t sure how to go about this venture, so I started looking up regular recipes and GF recipes. I started with a regular recipe that looked easy. I thought I would just substitute the wheat flour with my GF flour blend I keep on hand. It was spinach pasta. That was a very bad idea. Although the dough turned out and rolled out and cut up nicely- after it boiled it turned to mush. I could have boiled it too long, but my flour blend also contains oat flour and in hindsight that was probably a bad idea.
I came up with an idea to use a rice flour blend of brown rice and white rice and it worked very nicely. It was slightly difficult to roll out because even though I used a non-stick roller it needed a lot of flour in order not to stick to the pin. Sometimes it is easier to roll it out between two sheets of plastic wrap. Keep the rice flour handy because you will besprinkling it a lot.
Dough: This makes enough pasta for 2 people to have a decentserving. Double or triple if needed.
Ingredients:
5 egg yolk
2-4 tsp. of water
¾ cup brown rice flour
2/3 cup white rice flour
½ tsp. salt
Directions:
Combine flour and egg yolk and salt in food processor, pulse a few times until blended. Add water 1 tsp. at a time until the dough looks like a lot of little dough balls. Then scrape the sides and knead on a floured surface until it reaches your desired consistency. Wrap in plastic and refrigerateat least an hour, but overnight is best.
Cut dough ball in half and roll out as thin as you possiblycan on floured surface and then slice into strips.
Let strips lay out for about 20 minutes. Boil a pot of slightly salted water with some olive oil. Once boiling throw in pasta forabout 4-5 minutes and drain. Return to pan and pour enough olive oil on it so the noodles do not stick together.
You can use your favorite sauce or keep reading for my garlic and spinach tossed pasta recipe.
Garlic, Pine Nut and Spinach Tossed Pasta
Ingredients:
2 cup of washed spinach leaves
¼ cup olive oil
1 tsp. parsley flakes
¼ cup of chopped garlic
¼ pine nuts
Directions:
Heat olive oil in skillet and then add garlic, pine nuts and spinach. Sauté until garlic turns golden and spinach is cooked.
Pour sauce over noodles and toss with parsley.
Enjoy! 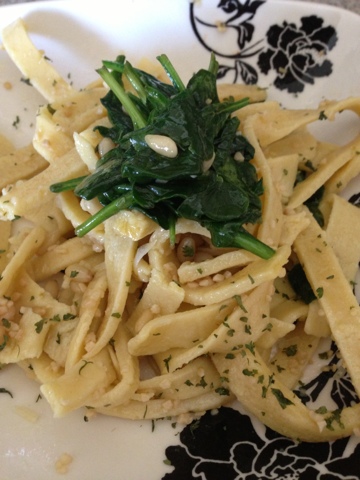 Easy Allergen Free Valentine Treats that you can... 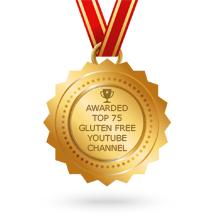